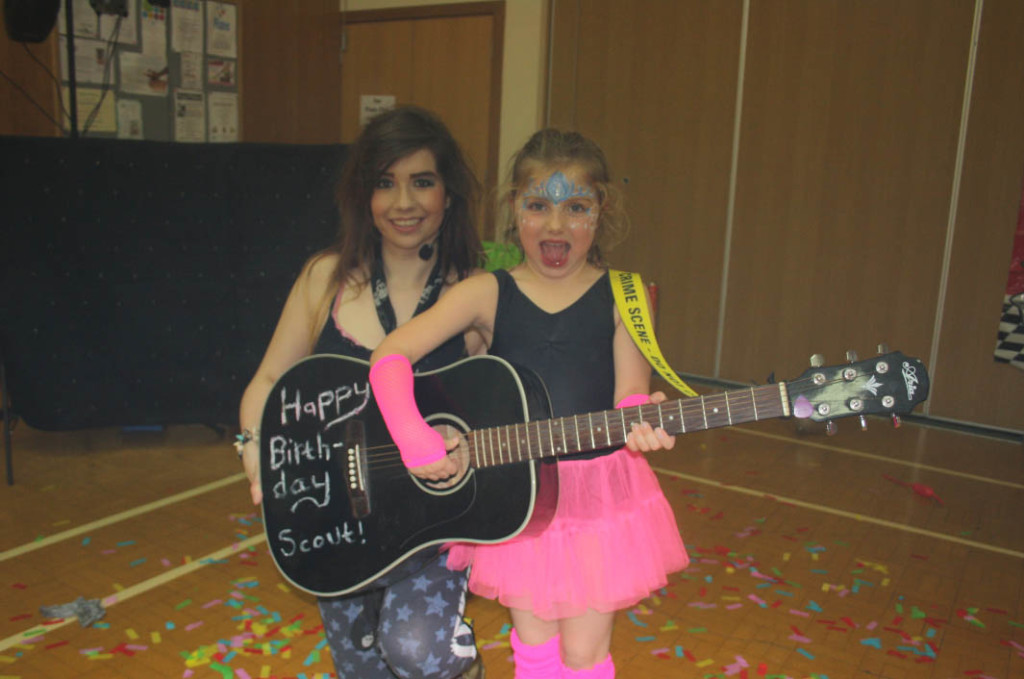 Imagine your child’s face when a real Rock Star arrives to entertain at their party! It doesn’t get much cooler than this! Our Rock Star entertainers are trained musicians. They have real band experience having appeared numerous times to play and sing on stage and even on TV!

Your entertainer will theme your venue for you with inflatable guitars, large scene setters, VIP signs, 120ft of sparkly bunting ..etc

They will bring a range of fun props for the children to enjoy from crazy rock star glasses, inflatable microphones, glow sticks and more.

Our themed  games will having children playing air guitar, striking rock star poses, running from fans and playing the drums.

We include a range of current and well loved dance games and play traditional games too.

As with all our parties there will also be balloon modelling, face painting, magic show and full disco with lights, amp, bubbles and streamers.

Don’t invite a pretend Rock Star to your party, invite a Treasure Box entertainer and get the real thing!

“Hi Jaime, I just wanted to say a huge thank you to Holly and Natasha for the rock star party on Sunday, Scout had an amazing time. All the parents commented on how lovely the face paints were and Holly did a fantastic job keeping over 30 6 year olds engaged and dancing. Some of the boys arrived rather reluctantly as they were at a girls dancing party, but Holly soon had they up dancing the chicken dance and Gangman style! Even the parents wanted to join in during the limbo!! I only wished I’d taken more photo’s. Scout said at the end of the party that when she grew up she’d like to be Holly, so please say a huge thank you to Natasha and Holly for making her party so special and memorable!!”

If you would like to book this venue for a themed birthday party please see their website: